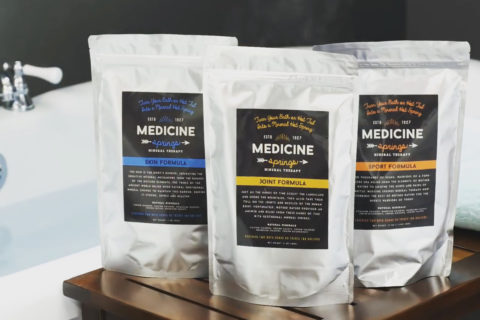 A chemistry teacher harnessed the power of hot springs to help his mother
By Michelle L. Cramer

Brandon Price’s mom was traveling to hot springs worldwide to help alleviate her painful arthritis. Upon her return from a 2010 trip, she wished for something she could just put in her hot tub and find relief — at home.

For five years, Brandon, a chemistry teacher, and his wife, Julie, traveled to world-renowned medicinal hot springs to take samples of the water and study the history and culture behind each.

Through water analysis at each hot spring they visited, they developed three formulas: Sport, Joint and Skin. “It took some time to figure out how to turn your hot tub into these world-famous hot springs,” Brandon Price says of the development process. “It’s sort of like ‘Breaking Bad’ without the meth and the money.”

Initially, they were giving the products away after Race for the Cure and through the Wounded Warrior Project. “The response we were getting was overwhelming, and it came to a point where we knew we couldn’t continue to just give it away,” Price says. “If we ever wanted to make a real impact and help a lot of people, then we needed to turn it into a business.”

Medicine Springs became a business in 2015. There were some initial bumps: The formulas had to be copyrighted. Packaging was a concern because the natural raw minerals react with each other, and Price learned the hard way that you can’t package those minerals in the same bag. When preparing for a trip to show the products to a potential retailer, the prepackaged minerals reacted, inflating the packaging. It exploded a white powder all over their luggage.

“We thought that’s better that it happened now, rather than in the airport where they would have said ‘What do you have going on here?’ ” Price says. Now the formulas contain individual packets of each mineral compound, which customers add to the hot tub separately so they combine only in the water.

Getting hot tub dealers on board was also a challenge. “Sending out samples and letting them try it and seeing how the hot tub equipment reacted after six months — if there was any negative impact on the jets, plumbing,” Price says.

Brad Thompson, purchasing manager at Pool World in Spokane, Washington, can relate. He’d been using the product himself for two years, but when he brought it to the sales manager, there was resistance. “It’s understandable, given the countless ‘new’ spa scents, sanitizers, minerals and water conditioners we are solicited with constantly,” Thompson says. “I usually leave new product decisions up to our salespeople, but I brought Medicine Springs in because I really like it.”

Pool World placed its first stocking order in June of this year. “I have been to dozens of hot springs here in the Pacific Northwest as well as Costa Rica,” Thompson says. “I could always tell the difference between the different natural springs and the way my body and skin feel after leaving the water. I get the same feeling in my spa now [with Medicine Springs], which is awesome. I think the customers are going to like it as much as I do.”

“Anything that enhances the health benefits for our customers related to hot water is a bonus for us,” says Don Riling, president of Olympic Hot Tub in Seattle. Olympic sold Medicine Springs as soon as it became available. Riling was involved from the beginning, helping Price with branding.

One formula lasts 90 days in hot tub water. Price says it doesn’t go bad after that time, but the user’s body has absorbed all of the benefits. Medicine Springs also just started offering a spray-on version of each formula. “A lot of these people love to soak in their hot tubs, but they also travel a lot,” Price says. “So we took the same minerals, concentrated them by 10 times and then added additional magnesium so you can spray it on and rub it in like lotion when you can’t soak. It’s a nice way for people to maintain that feeling when they’re away from their hot tub.”

Brian Wasik, owner of Spas of Montana in Helena and Missoula, started offering Medicine Springs about two years ago. “My sales guys love the stuff, and we’ve received great feedback from some of the customers using it,” Wasik says. “There are a lot of hot springs in Montana, so people tend to like that idea anyway. We tell them, ‘Let’s turn your backyard into one.’ We have a lot of repeat customers.”

As of June 2018, Medicine Springs distributes in 120 retail locations with approximately 30 of those being spa dealers. Fourteen of those spa dealers started offering the products in May and June of this year, and Price is excited about how quickly it’s catching on.

“No matter what tissue you grab to blow your nose, you always call it a Kleenex,” Price says. “We want to be that for hot soaking minerals.” To that end, Price and his wife, who are the sole employees for the company, go to about three trade shows a month with their children by their side, working on reaching more retailers and branding the company.

For Price, it’s not only about helping people feel better but also about creating a legacy for his children, working to make it a family endeavor. In five years, he hopes to see the product all over and for people to understand that it’s important to their health. “And in 10 years, I hope the kids are running it,” Price says, “and I’m soaking in hot springs for fun.”