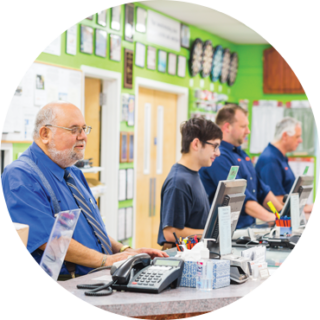 Turn Down No One
By Megan Kendrick

Jeanne DiPaolo’s Christmas list looked different from most people’s. Instead of gifts for herself, she gave her husband Dennis a list of charities she wanted him to support.

Jeanne died of cancer in 2015, but Dennis honors her memory by giving to some of her favorite charities, like High Hopes Foundation, a nonprofit that provides enriching experiences to ill children.

Giving has always been part of the DiPaolos’ business philosophy: Throughout Seasonal Specialty Stores‘ 29 years in business, it has supported more than 160 organizations.

“As a business owner, you have a responsibility to support the community,” DiPaolo says. He tries to support the small, local charities. “I never say no to anybody who’s small.”

Typically, the company gives gift certificates, though it does larger donations to a select number of outlets annually. “I’m saying yes in a small way to a large number of people,” DiPaolo says.

After spending many years at a large company where DiPaolo felt it was his job to say no, he relishes saying yes as much as possible.

“[At the large company], my job was to prevent money from being given out,” DiPaolo says. “You had to fill out forms; you had to have the right tax stuff and all that. There are lots of charities that are so small, they didn’t even know about the right tax forms. I support them, and I try to avoid the national [nonprofits].”

Word gets out, unsurprisingly, when you don’t say no very often, so the company gets many, many requests a year. But DiPaolo keeps track of who Seasonal has supported and tries to keep it to one donation per organization per year.

“The point of saying yes to everybody local is to support the local community,” he says.