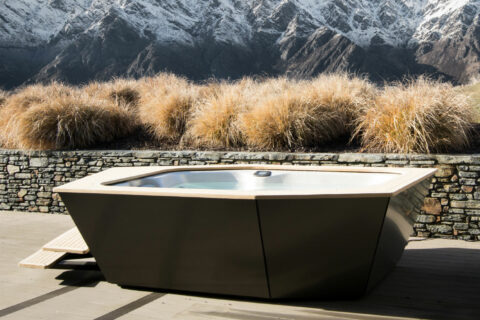 Call it fate, destiny or coincidence, but the 2017 pool and spa show in Orlando was the beginning of big changes for Viking Spas of Grand Rapids, Michigan. While there, Viking staff crossed paths with Australian acrylic spa manufacturer Vortex Spas.

Vortex was on the hunt for an American-made spa brand to offer to its New Zealand and Australian markets, and sought to distribute the Vortex brand in the United States. Viking Spas was looking for a swim spa line.

A family-owned brand in the hot tub industry for 25 years, Viking Spas offers spas made of a high-density polyethylene and low-density polyethylene mix, with little desire to compete in the acrylic spa market. “We’ve forged our marketing program with the slip-resistant surface,” says Tom Kneeshaw, director of sales and marketing for Viking Spas. “It gives us a real value-added product. We’ve been able to develop that niche in the market.”

While Viking was interested in partnering with a manufacturer for swim spas, it wasn’t until Vortex approached key Viking staff with a never-before-seen hot tub design that acrylic hot tubs became a consideration. “When they saw the initial design for the IKON, they were sold,” says Andrew Pullen, CEO for Vortex Spas.

Founded in 2009, Vortex distributes to more than 20 countries, with a vision of “leading our market by creating products that are undeniably beautiful, environmentally friendly and easy to use that improve the health, well-being and happiness of our customers,” Pullen says.

The development of the IKON began in 2016, after Vortex conducted an Australian market-research survey. “One of the questions we asked was, ‘Would you buy a hot tub?’ ” Pullen says. “Many answered that they were sick of the square plastic box look.”

The materials for the IKON are revolutionary to the industry, Kneeshaw says. The rim is made of decking material used on yachts, which gives it the look of wood, but the durability of rubber. Rather than a wood-grain look to side paneling, IKON has aluminum cladding, a popular material in the building industry. “Whenever you see cool buildings, high rises and skyscrapers — with colors and cool designs and shapes — that’s all using aluminum cladding,” Kneeshaw says. “It doesn’t rust or deteriorate; you can shape it, powder coat it or color it; and it will look that way for years and decades to come.”

There is only one model available for IKON as of now, but Vortex is considering different sizes and shapes in the future, which Viking will also offer through the ongoing partnership. Viking introduced IKON at the Pool | Spa | Patio Expo in Las Vegas in November; Vortex introduced it a week later at the trade show in Lyon, France. The response was optimistic and not surprising to either company.

“The people who appreciate what the spa is are typically the people doing in-ground pools, vanishing-edge pools, cutting-edge design,” Kneeshaw says. “A lot of them have mentioned to us that traditional hot tubs don’t look good in the backyards of houses that tend to have more of a design aspect to them.”

Dave Fritz, vice president of sales and partner for Inside Out Recreation in Maumee, Ohio, sees the IKON as a spa that “fits a lifestyle need. It has a very unique and stylish exterior that will appeal to that specific buyer,” he says.

“As I approached the hot tub, I was amazed at the clean lines and the way the shell meshed with the seamless cabinetry around it,” says Adam Hazenfield, vice president of Watsons. “It felt like an in-ground pool held out of the ground. This is a centerpiece for anyone’s backyard and definitely a show piece for every dealer’s showroom.”

Both companies project a prosperous future through their partnership. “Vortex and Viking products complement each other,” Pullen says. “We see mutual success ahead of us — Viking through offering IKON and Vortex swim spas to the U.S. market, Vortex through offering Viking product to the Australian and New Zealand markets.”

Both Pullen and Kneeshaw say success and growth start with IKON. “With the U.S. being by far the largest market worldwide, we are confident that IKON will elevate the gravitas of hot tub ownership within an entirely new group of customers,” Pullen says.

Hazenfield calls IKON a “silver bullet” that will help elevate Viking, obtaining more U.S. dealers, and Fritz concurs. “This will be a very tough spa to compete against, as it is so unique to anything out there,” Fritz says. “It will be a spa that will drive the competitor crazy.”